Two Rivers, referring to the Bergriver and Wemmershoek River both running through the land, has its origins in portions of historic landholdings as part of the first farms granted to the settlers in the 1850s. It sits at the foot of the Drakenstein and Simonsberg mountains and traces its history back to the early days of farming.

When the wine industry boomed in the 1800s, the land became home to some of the earliest vineyards. However, when the estate fell prey to a phylloxera outbreak in the late 1800s, Cecil John Rhodes oversaw the conversion of the wine lands to fruit farming, resulting in the famous Rhodes Fruit farms in 1902. The estate, famous for its fruit culture, was owned first by the Beers and subsequently by Anglo-American farmers. Today, Two Rivers, named after the two rivers running through the estate, is divided into 15 portions, all under separate titles. 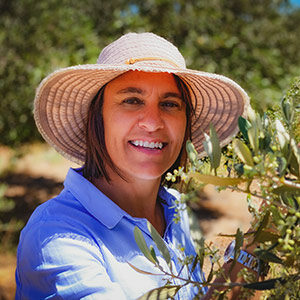 Marlene Loubser, who was involved from the very beginning of the Lamara Project, is a Horticulturist graduated from Stellenbosch University.

Apart from a passionate farmer she is also a Gold Savantes Associate of the Register of Extra Virgin Olive Oil and one of the judges of SA OLIVE’s tasting panel, which judges and selects the top SA Olives Oils submitted to the SA Olive Awards.

A farm such as Lamara can only produce quality when there is a good team present.

Lamara has a crew of 12 permanent staff members managed by Marlene.

During harvest, up to 40 extra workers and subcontractors are taken on to meet the deadlines.

As it is important for us to reach high quality standards, we stress the importance of certifications and we proud ourselves for our awards. Lamara is member of SAOLIVE and is GLOBAL GAP and SIZA certified.